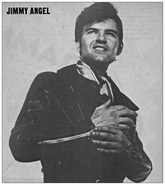 Okay, try to keep up!
Jimmy:

For a guy that wears a lot of black, Jimmy sure has led one colorful, crazy life!

Jimmy is the subject of an upcoming documentary film, The Jimmy Project, which details his longstanding alliance as protégé of infamous mafioso Joe Colombo. Visit the Audio Visual Motion website for more information about this project. Oh, and in case you were wondering, his teddy bear's name is Lucky!

Jimmy's story is one thing, but seeing him perform live is another. He performs classic '50s rock 'n roll with a passion that is authentic, contagious and utterly unique; nobody rocks it like Jimmy. But don't take our word for it - go and see for yourself!